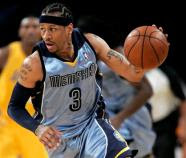 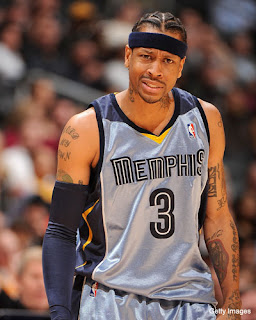 Everybody that has ever loved basketball late 90's to the present knows how much of an impact Allen Iverson had on the NBA. From him making millions of dudes rock braids whether Black, white, asian, arabian and arguably injected Hip Hop culture into the league and not making it look corny. Even though I see him all the time now in Atlanta with some really questionable entourage and companions, I still choose to remember the AI from my teens. Though I'm not down with his personal life from the things that I've heard firsthand which I don't even wanna share cause it's so f@ckin disgusting, I respected AI the player! I guess everything has to come to an end, and AI is no exception but I felt with his impact and volatile career he would go out way wilder than this.

With no apparent interest from NBA teams, Allen Iverson is set to retire, according to an online report.
Commentator Stephen A. Smith published a statement on his Web site Wednesday attributed to Iverson. It said Iverson plans to retire but also that "I feel strongly that I can still compete at the highest level."
The statement also said Iverson has tremendous love for the game and the desire to play, adding there is "a whole lot left in my tank."
"His legacy would be huge," Cleveland Cavaliers All-Star LeBron James said. "He's one of the best when you talk about guys 6-foot and under in the game of basketball. He played injured and he played hard every single night. I don't think it should end this way, but if it does, he's left a lot of great things behind."
The 10-time All-Star played three games this season with Memphis before taking a leave of absence to attend to personal matters. He was waived after the two sides agreed to part ways.
It was the second straight ugly ending for Iverson, who was unhappy last season playing for the Pistons. He was upset that Detroit coach Michael Curry and Memphis' Lionel Hollins used the former MVP as a reserve.
The New York Knicks considered signing Iverson last week after he cleared waivers, before deciding he would take too much playing time away from younger players they are trying to develop.
The Knicks seemed to be the only team who would consider bringing in Iverson, so there was no guarantee he'd play in the NBA this season, anyway. Still, the announcement Wednesday came as a surprise to George Karl, who coached Iverson in Denver.
"I think he still has something left to give some team out there. If that's his decision, he'll go down in history, I think, as the greatest little guard ever to play the game of basketball," Karl said.
"I was happy to have him for a couple years and hopefully our paths will cross. But I have a sneaky feeling that somewhere along the way an injury or a circumstance with a team will open that window back up."
One of the NBA's great scorers, Iverson entered this season with a career average of 27.1 points that ranked fifth all time. Yet there was almost no interest in him this summer before he went to the Grizzlies on a one-year deal.
Iverson can still score, as he averaged 17.4 points with the Pistons last season. Yet he has made it clear he doesn't view himself as a backup, which has likely hurt his chances of signing with a contending team.
"It's sad man, especially coming from a guy that's close to me and a friend," former Nuggets teammate Carmelo Anthony said. "To see him go out the way he's going out right now, it's not like he wants to go out, he's almost being forced to retire. It's a bad situation right now.
"It was just, he got dealt a bad hand from when he went to Detroit up to right now. Everything kind of spiraled downhill. I never want to see nobody go through nothing like that, especially a guy with his talent, somebody who can still go out there and be productive."
The 6-foot guard thanked former players and coaches in the statement, plus the fans in Memphis and Philadelphia, where he spent his best years. He said stepping away would allow him to spend more time with his wife and kids.
He also said he thought he could still play after 14 seasons.
"I always thought that when I left the game, it would be because I couldn't help my team the way that I was accustomed to," it read. "However, that is not the case."
Messages were left for Iverson's agent, Leon Rose, and his business manager, Gary Moore.
If this is the end for Iverson, he leaves with four scoring titles and a playoff scoring average of 29.7 points that ranks second only to Michael Jordan. He led the 76ers to the 2001 NBA finals but never won a championship.
Or he could choose to wait and see if a team in need of a scorer comes looking for him later this season.
"I don't ever believe anyone retires until they get to the point they have to," Boston coach Doc Rivers said. "He had a great career if it is true, but I still think he has more to offer."
Word~
Posted by FOREVER FLY at 6:45 AM No comments:

Damn baby! Yo know it's a recession when the state giving out time like it's the new H1 Flu out in this b#tch for real: 09 was real for everybody but this roll call of rappers is f@ckin crazy!
Big Up to Big Meech you were a big influence on the kid man nough luv and thanx for the game G you always in our hearts and thoughts king and Evil Twin for putting me down I'm waiting for you to come home fam! Shout out to Mystikal WTF when does this ni$ga jump! Big shouts to Cmurder hold ya head pimp natural life + 4 OHN!!Hold ya Head up Tru Life that's my dog right there and your brother 2! yall some soldiers for real! My man Max B (75 years c'mon)! TI is my folk for real, no blog talk it's almost over G soon come home! Lil Boosie got like 4 years for a probation violation? c'mon son he got like 7 kids on some real shit, Weezy going in for a calender he got like 4 kids...B.G gonna get some time, Messy Marv, Millz went in but he's back out... Twisted Black, Big Gee, Blu Davinci, all my BMF Family, hell Gucci got like a year for dirty piss too...(funny story my brejrin in MIA called me sayin Gucci performing on Thanksgiving you coming down? WOW! promoters are getting it how they live for real!!) I really hope Gucci don't think jail=records cause every time his record drop he get lock? His show money would be incredible and he would actually get to promote the muthafucka and get more sales but WTF do I know...
Hip Hop's gonna be super boring!
Anyway Wayne's tryna capitalize before he go in (literally) Toon got Young Money releasing same day as Rebirth his rock fused album like 12.15.09: this is gonna be interesting! I wonder if Young Money will crumble like dominoes when wayne's gone? I guess we'll see...
Anyway shout out to my affiliate Hustlafide he got this up 1st but QD3 did a remarkable job it made me actually watch all of it, it was really well put together...(I can't believe he recorded the swagger like us verse in the hotel in Amsterdam with a LV case of stacks to play wit and what like like 2 pints or more of lean in a Vitamin Water cup (OMG can you imagine the weed he was smoking). No wonder he has so many haters, he makes them feel poor just watching and that dude is living very MAJOR!
Posted by FOREVER FLY at 9:26 PM No comments: